So you've been playing fifth edition for awhile now but it still seems rather bland. After more than 5 sessions you'll start to realize that the monsters as they are in the monster manual lack a bit of punch and heft. That's not to say that you should make them impossible to beat and kill your players outright (as if that makes you a good DM, pro tip it doesn't). But you need the monsters to have a bit more oompf. The monsters aren't here to kill the players (most of the time), they are just out here trying to live their best life while a bunch of robbers and thieves are kicking down their proverbial doors trying to murder them.

Here are some simple rules to make the combat a bit harder but not too difficult.

Simple rules for your session.


First off combat can take a bit too long so;

3 Combat encounters per 4 hours of play max
All of these should be close to hard or deadly. (see kobold fightclub)
All of them should be resolved somehow via non combat, (deception,persuasion,environment)

Remember that your Monsters in the Monster Manual are average and not exceptional versions of that monster. Create some variety in the HP as needed. Use these to increase their chance of hitting and putting some danger into your scenario. You don't have to use all of them at once by the way.

AC increase by +1
HP cut it in half, round down
Attack to hit bonus x2
Damage dice chain up one level and remove bonus damage (be wary of this)
All creatures have  at least one recolored spells as abilities.
Become a bit more verbose in describing the player and monster actions.

Both inspiration and death saves are eliminated. Replaced by a luck score. Each character gets 1 luck at level 1, +1 luck at level 5 and 1 additional each 5 levels. Max of 5. Awarded by DM discretion for completion of a session or doing epic shit, being funny etc. Players burn this luck to come back from the dead DC 10 or higher for 1 hp or roll DC 15 for 1/2 hp. They can also use this to re-roll natural 1's or gain advantage. This gives the players a bit more power over their fate in the game. If things are getting too deadly start doling out more luck in the session.

Let's use the goblin as an example of how to use these rules. 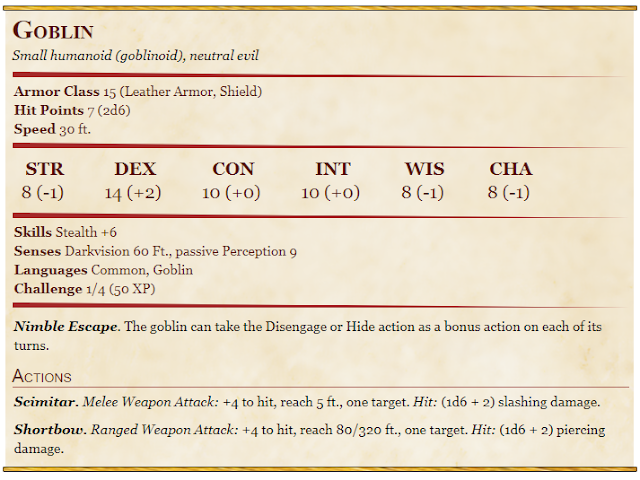 Let's change that up a bit, new values are;

Let's give our friend at least one basic cantrip and recolor it as an ability. We'll use Vicious Mockery

Lets call it Goblin Slur and only allow them to use it once per day. Having combat open up with goblins cursing you and goading you into a fight is a bit more memorable than clubbing an HP bag to death.

Hopefully you find this helpful in making your monsters and combat a bit more memorable and deadly.

Posted by Slime Grappler at 1:33 PM